More Than Meets the Eye

I wish there was more to see in these photos, but a good deal really has taken place over the past two weeks. 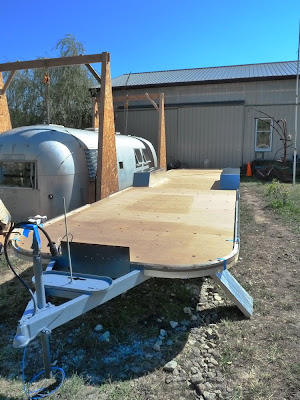 When I last posted we had a primed frame. Everything from that point on is all reconstruction. She is now being put back together and it feels great. I will highlight some of the things that got us to this point. The exposed areas were painted FTW grey. I prewired all the brake lines through the frame first. The brake wiring included the runs for the break away safety switch to the tongue. A new umbilical cord was also installed while it was easy to work from above. 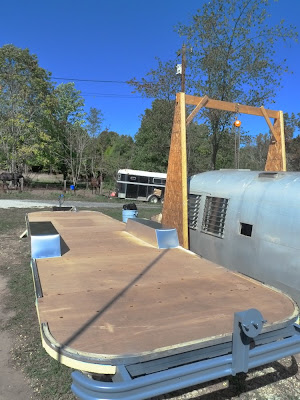 Marine grade plywood was bolted down to the frame and the outside shape was cut using the template I fabricated during deconstruction. The template assured me everything would line up perfectly. The new wheel wells were also installed and sealed to the frame. I reused the curved extrusion sections of "C" channel for the front and rear curves, but all straight sections were fabricated using new material. There was just no reason to reuse something that was beat up and full of holes. I can now drill new holes into virgin materials when riveting the shell in place. 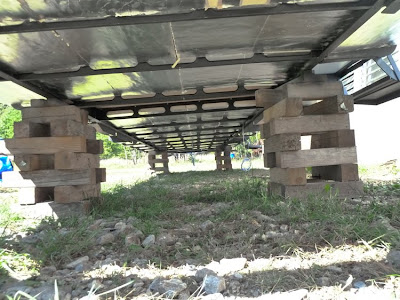 2 inch of polyisocyanurate foam insulation was carefully cut and glued to the underside of the plywood floor. This gives a full 12R of insulation down there. Mice are not very fond of it as nesting and it does not absorb water. I have used this insulation a number of times now. I would like to go ahead and install the belly pans which have also been fabricated using the originals as templates. The hold up is waiting on the grey water tank. It needs to go in and all the lines run to it before I button it all up down there. It is very important to have all that complete before it is buttoned up. 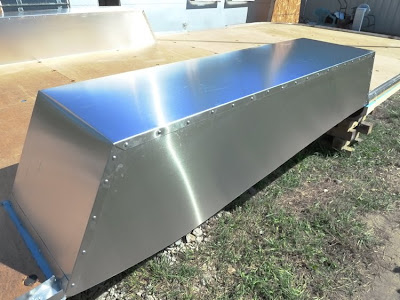 I also could really stand to get the new axles mounted under these new wheel wells. Axis built them on the 16th so hopefully they are on a truck heading towards me. The tank and waste lines are more important than axles but having things on hand makes me most comfortable for work flow.
I know none of this is very exciting to see, but it is all steps forward toward reuniting the shell and chassis. Hopefully by next posting the belly has been installed and the shell has joined back where it should be. That should offer some visual interest.
Posted by Frank Yensan at 2:30 PM 6 comments:

The past two weeks have been tremendous with Steve coming into town for six of those days. I will go through some of what has happened since my last post...
After my last shell off I decided to go about things a little differently. I had seen how a friend in the UK lifted the shell from above instead of from below. Doing the lifting from below is easy, but the lowering it back down is rather precarious. I adopted Chris's method, for it offers a good deal of safety and ease. Since I do not have a gantry in an old warehouse to use, I needed to either buy one or build my own. I went with the "do it yourself, build your own" gantry. 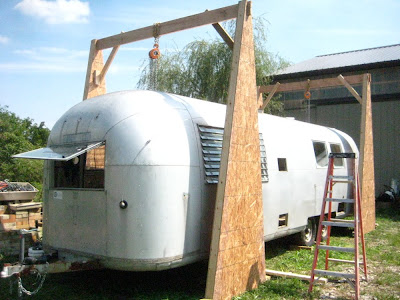 The gantry I constructed is basically two sets of saw horses. They are giant saw horses though, at 12 feet high. I should be able to use these over and over for many lifts to come. They could actually lift the entire trailer I think. I made sure both sides of the gantry were level with each other before connecting the dead fall chain to a beam below the front and back vents. The shell, once released, just dangles in the air. It is amazing how little weight these shells have in their raw form. 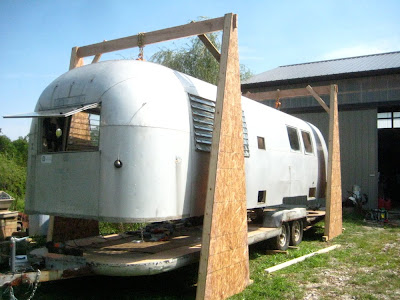 Literally the pull of two fingers sent it right up in the air. There are a lot of rivets to find and shear before it can happen though. The term blind rivet is no exaggeration, many are so obscure you would never think them to be there. Once they are all cut, it just lifts up very easily. 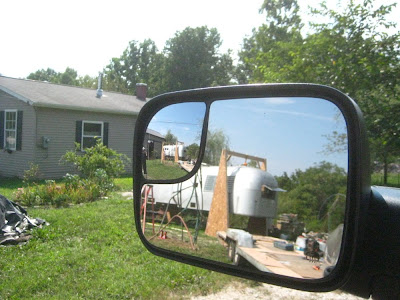 We just rolled the entire chassis right out from under her. I will tell you, seeing the shell hanging there was a very unusual sight. 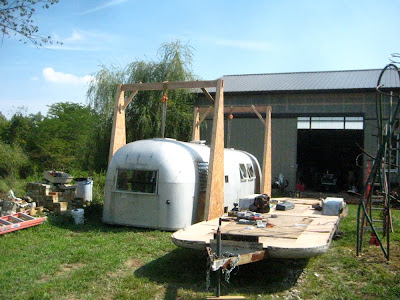 Getting the shell down on the ground quickly was important. The slightest breeze caused it to sway back and forth like the sail on a wind chime. Fortunately, Steve held it still till we could lower it down with the chain fall. I think this method of lifting and lowering worked very well. It was safe and very efficient. The next major task was to take the belly pan off. 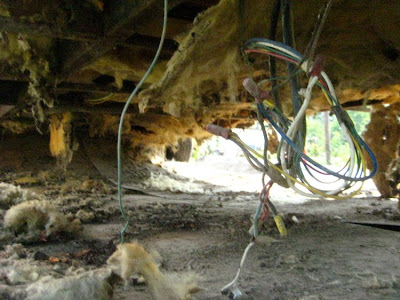 Folks, the belly pan on any vintage Airstream is a nasty ugly place. This may look extra dirty, this may look very unusual, but this is exactly what I find every single time. Even in those cute, well taken care of units, this is what it looks like. It is best to remain ignorant in my opinion, and not look in. 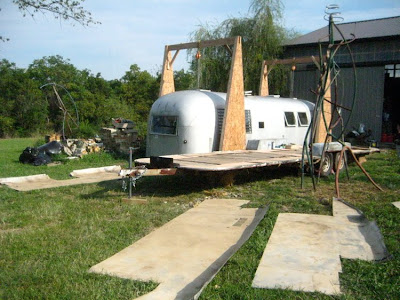 Once the belly was down and cleaned off it did not look as bad. It will only serve as templates though, for just about every out rigger has sawn through. I think a previous owner had an affection for running over large objects also, for it has many major dents. 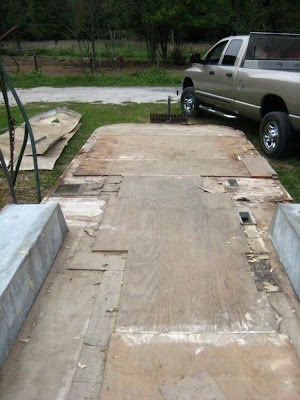 Here is a good indication of the condition of the floor. You can see the plywood that was screwed down over the rotting original. A few nails were also used for good measures. 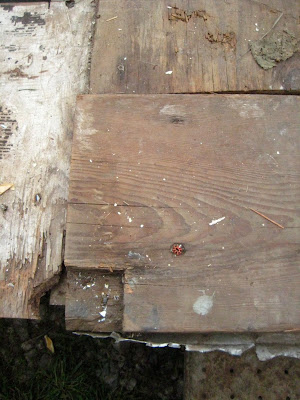 For real secure flooring you might want to use a Hilti gun (sarcasm for those unable to recognize it). For those not familiar with a Hilti gun, it uses a 22 caliber load to literally shoot a nail. This tool is typically used to shoot(yes, shoot BANG) a nail into concrete or steel in commercial applications. You can buy them at your local orange or blue box, but you are supposed to be certified to use them. There have been many cases of this tool being used incorrectly and the nail going through the intended location and into an innocent victim. I am continuously baffled by what some people do. A HILTI GUN IS NOT AN AIRSTREAM RESTORATION TOOL. Okay, moving on. 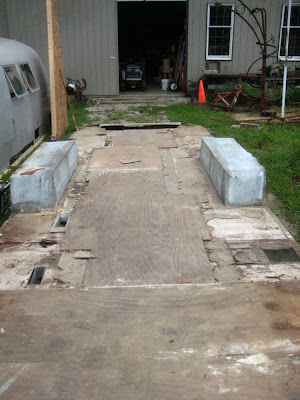 The wheel wells look fairly good in this photo but they are very torn up at the seams. There are many holes where they have rusted through from the outside in. Like the belly pans, the originals will serve as patterns for new ones. 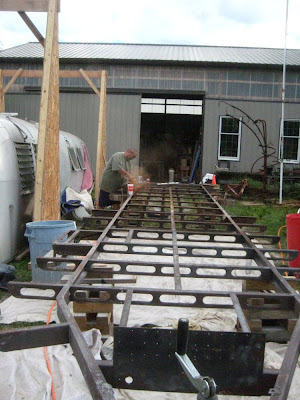 A big surprise was the condition of the frame. Looking at the floor, I would have guessed major damage. I told Bruce to cross his fingers as to the state of the frame and he must have crossed all his fingers and all his toes. There were four quarter sized holes and nothing else. No cross members or outriggers needing replacement. We were able to just focus on cleaning it up and make alterations for the grey water system, install the second set of steps, and repair the bumper. 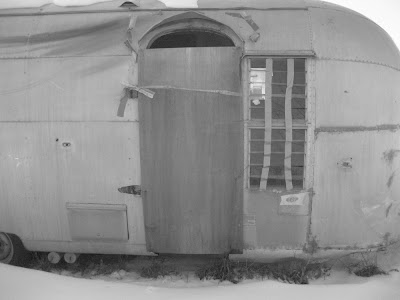 Sometimes in a restoration parts can only be found by taking them from another trailer. Originally this 1960 Tradewind was bought to use the door for this project. Unfortunately, the door decided it liked Tennessee and jumped off along the road. The overall condition is very poor, so it really is good for parts only. All you purists calm down, I am being respectful. Many trailers will benefit from the sacrifice of this one. 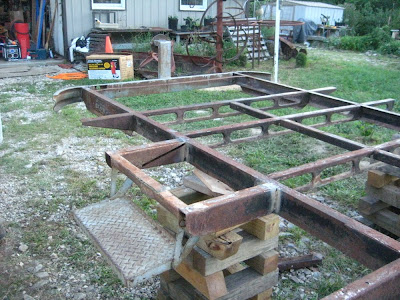 Steve cut the entire step assembly out of the Tradewind and welded it onto the Sovereign frame. He made it fit and operate perfectly. I was very impressed with how he made this happen. It took a little effort, but it really paid off. 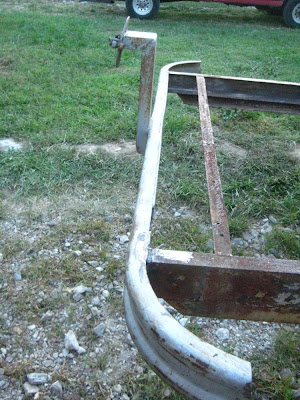 Another thing we took off of the Tradewind was the bumper. The Sovereign's was beat to hell. We contemplated trying to straighten it out, but it always would have looked imperfect. The one from the Tradewind even had a spare tire mount on it. A huge bonus if you ask me. 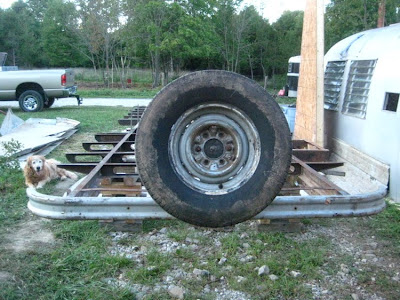 A bunch of you are getting all worked up now by this. I know, some of you are thinking that there should not be all that weight hanging on the bumper, but I have thought this through a great deal. We are loosing the rear bathroom. There was a rather large black tank back here and that is gone along with all the other stuff. We observed the frame when the wheel was put on and the frame did not move. The frame is very flexible and rather weak by itself. I feel strongly that the spare tire will be no problem at all. The reenforcement won't hurt either. Mr Byam took trailers through Africa in 1959 with two tires hanging off the back. It will be all good. 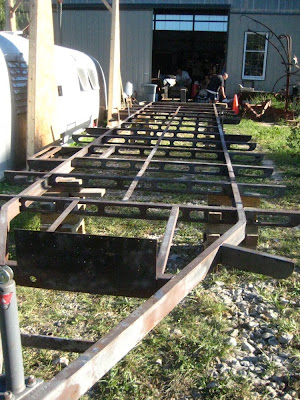 Here is the frame all cleaned up and ready for primer... 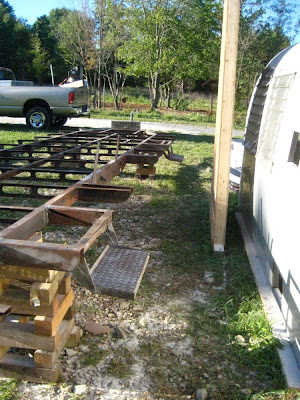 I love the way that second step looks. I am very excited to see what the rear door will look like once the shell is put back. This project has me very excited in general. 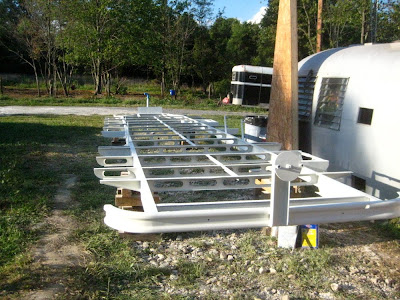 So the next step is treating the frame to minimize the possibility of rusting out in the future. Being always on the hunt for new technology to improve the process I went to my local paint store. I am not going to mention names, but this company is known world wide. I have always been very happy with their products and know that the real bulk of their business is industrial coatings. I let the fella there talk me into an oil based product designed for metal structures such as oil wells and bridges. The product went on very well and flowed through my cup gun perfectly. When I left for the day I was very pleased with the results. 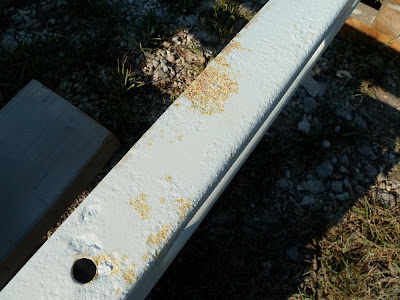 Unfortunately 14 hours later I found this to be the results. Showing up for work and seeing this was like a swift kick to the groan. It said boldly on the label "CONTAINS RUST INHIBITORS"... Uhm, was that a typo? Did they mean to say "CONTAINS RAPID ACTION RUST INCUBATORS" Now I have been thrust into this position before where I try something and it fails. My failures are not the responsibility of my client, they are mine. So I clocked out, got out the wire brush and the sand blaster, and removed all the primer. Next I used a product I know works. If Eastwood ever becomes a sponsor, I will mention their name. 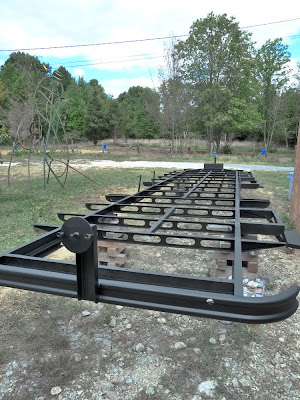 Black is a more fitting frame color anyhow. I learned a great deal during this process. Colin Hyde actually gave me a lead on something to try out the next time around. For now, this is a proven rust treatment that I know works well. I just need to top coat the parts you will see with FTW grey and we will be set. Some might view this as a lost day of work, but for me it was a good learning experience. Learning is priceless ya know. That is unless it is college learning, that is very costly. Just ask my neighbor who's daughter started at BU this year. 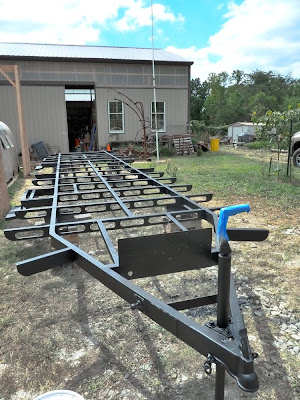 Next post: New floor, new wheel wells, new "C" channel, grey tank, wiring for the brakes, new belly pan, and most likely a reuniting of chassis and shell.
Posted by Frank Yensan at 4:55 AM 10 comments: