I really do need to get more regular on posting. My apologies. 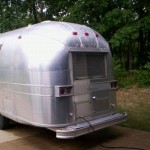 Currently I am working on a 1967 Overlander. It has some very unusual tail lights. In all honesty they kind of have me puzzled because in 1967, Airstream was using an entire taillight assembly, pictured above. The assembly is a boxy affair and not very aesthetically pleasing(in my opinion). These assemblies are also really bad leakers. 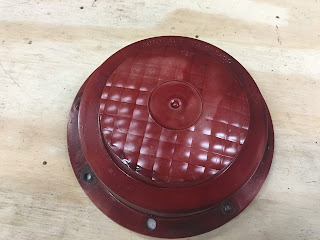 The Airstream I am working on has an AutoLamp system on it. Here is where it gets very odd, Airstream did not use AutoLamp. As late as 1966 they used the Bargeman 99, but only on the Caravel. By 1967 all models had the boxy tail lights I showed you earlier. Why the anomaly? I wish I knew. These AutoLamp taillights are no longer made. You can still buy reproduction lenses but not the bases. As most things made of stamped steel they tend to rot out over time. AutoLamp was commonly used on mobile homes and house trailer that were not really moved too much. 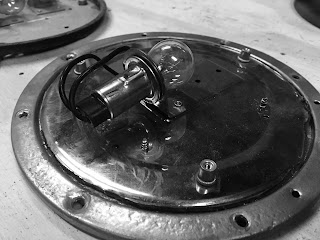 This is what I found under the lens. It may not seem odd at first glance but it is actually a very clever hack. This hack was so well done that I did not pick up on it at first glance. When I did notice, my thought was 'Nice hack!!! Well played' 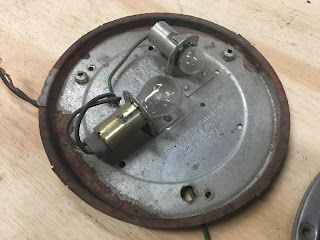 Someone took a Bargmann 99 reproduction base, similar to this original and they cut off the outer lip. Then mounted it onto an original AutoLamp base. 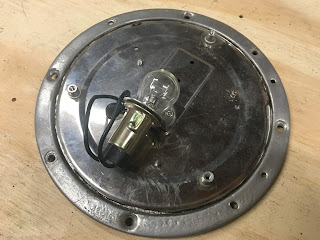 The craftsmanship used to adapt the new base to the old is simply brilliant.
Well played.