I Want to clarify something I said in the last post....

I do not think that there are people in Europe not wanting airstreams, I actually think the desire and dream is as real for Europeans as it is for Americans. I think that some of those supplying the "want", do it for the money and not because they hope to see peoples dreams come true.

Just wanted to make that clear.
Posted by Frank Yensan at 5:51 PM 1 comment:

Where ya been, why no posts?

What did ya drop out again? These are all questions I have been hearing from friends lately. Truth of the matter is, no. I actually have been very busy operating the hardest tool there is to master. The tool called honesty. I will explain all about this tool as this post progresses.

As most avid Airstreamers know, Wally went to Europe in 1955 to scout out a caravan route. He had the boys in the factory build a very special Bubble for him that was super light weight. It was designed to be towed by a Volkswagen Beetle. The frame was built of a magnesium alloy and the interior was designed to be super efficient and light weight. Now a Bubble is a small trailer and is very light weight from the start. A VW in 1955 was only 35 hp, so it had to as light as possible. Wally was really pushing the "ounces makes pounds" rule here. For all his efforts, it is said that he only saved 200 lbs. 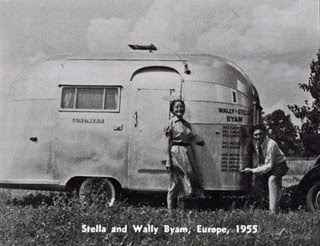 Stella and Wally set off in the summer of 1955 and from all accounts it was a successful trip. The trailer performed well and the route was laid out. Now this is where I am going to interject some personal opinion... Europe had been there for many years. The roads were all mapped out for something close to four thousand years by the time 1955 rolled around. The US Army was still firmly stationed all over Europe and they too had mapped things out well. Wally was not scouting, he was spending some quality time with his wife. What a better way to spend time with your wife than to tour around Europe in a Bubble? Can you imagine? Well, I sure can. But more importantly, so can my newest client who now owns this very Bubble. 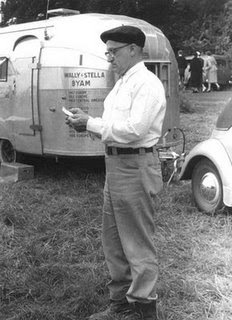 Yes, you heard that right... I am being honored with being able to work on Airstream # X251. I contacted the new owner as soon as he purchased her at auction and we have been talking ever sense. Many lessons have been learned in the process. The biggest lesson has been that being honest and forthright will prevail. We have both found out that there are many sharks out there. The moments a single drop of blood hits the water, they start zeroing in on the drop. They circle around looking for any sign of weakness so they can move in and make the kill. I have found that Airstreams attract two distinct types; there are those that just love everything about them and get involved due to a burning passion commonly called "Aluminitis" These types are not concerned with costs and the feasibility of the project, they are drawn by their hearts. Most reading this blog fall into this camp. The other type is the shark I described. They are into the hobby only for the financial aspects. These are the owners that know how much it is worth and how much it could be sold for. These are the types that buy trailers on local classifieds, and resell them in a different market often at 4 times what they payed. Some even never go see the trailer, ever. They do it all from their computers. The shark type is the guy that exports trailers to Europe, not because they have a buyer over there that really wants the trailer, but because they can make more money than selling it here. A piece of the export fees makes it so much sweeter.
I am of the first camp and anyone that knows me, know that as Gospel Truth. I saw the opportunity to be a part of getting a piece of Airstream history back on the road. I saw the opportunity of helping some ones dream come true. I am a very lucky boy. I am very honored and some what humbled by it all. I hope many of you will stay tuned to watch the progress and see the transformation. I cannot say for sure what we will need to do, but what will happen is the new owner will soon be able to take his wife for some quality time where ever he wants.

I lifted those photos from another blog listed on my Annalumanum blog. Brad has been helping the buyer from the Phoenix end of things. He is one with a pure heart for sure. There are very few know pictures of this trailer so we all have to share the ones that do exist.
Posted by Frank Yensan at 2:37 AM 7 comments:

Some of her insides...

Many have asked to see the inside of Luna. I do not want to dissapoint, so here you go. These photos were lifted from Rob Bakers blog. Yes, he is the one that sold her to me. Yes, I have thanked him profusely and will probably do so for the rest of my life. Rob has been a great friend to me and knew how much I wanted her from the day he said he was buying her. I actually said I would go recover her in Florida, but he went with his family instead and they all went to Magic Kingdom while down there. 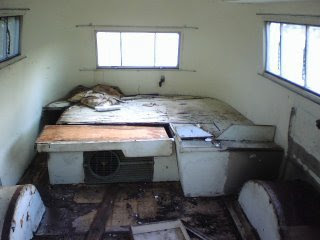 Here you look to the rear. I know this is very disorienting for many. Usually in an Airstream, one is looking toward the bathroom in this shot. This is where two twin beds are supposed to be. A night table should be centered on that window. All that mess will be coming out. Who am I kidding? You see that floor? It all comes out. 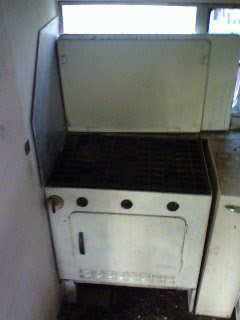 Love that stove. I can almost smell the peach pie baking in the oven. What a great view as I cook bacon in the morning. 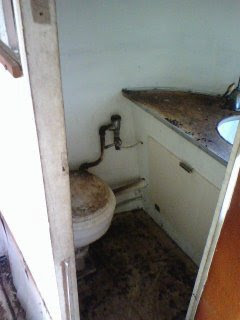 Just a head and sink. This trailer was made for me for sure, I have often said that a shower is a novalty. I would not put one in my own trailer in the future. So here you go, just what Frankie was looking for. 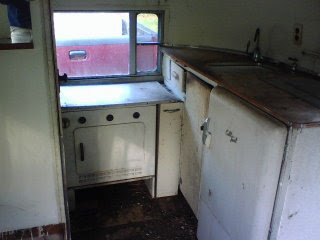 Small but efficent kitchen.
Posted by Frank Yensan at 4:18 AM 6 comments:

Frank is one happy dude. Be very certain of this fact my friends, Frank is very happy. The harem has grown by one more very sexy girl. This girl is really something special to me. Her name is Luna, and she will most likely remain as mine forever. A trailer like this does not come along every day. I have been thinking of her day and night since she was finally offered to me for sale. 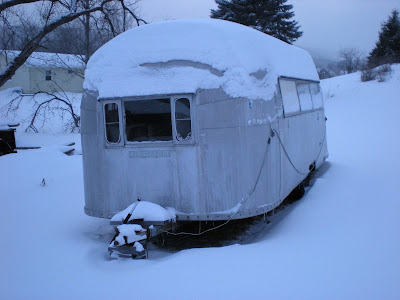 She is a 1954 Airstream front kitchen Safari. Thirteen panels of Alcoa beauty grace her end caps. Three long street side windows for total light saturation to the interior. Hehr Standard windows all the way around. 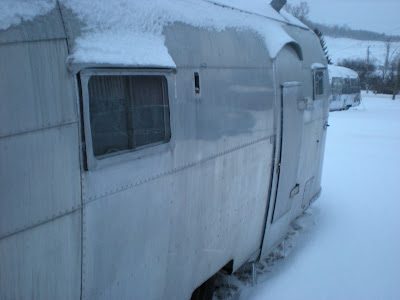 A door with in a door is a must. This one is in a non suicide door. It opens against the wind for those not familiar with the way the door opens. This configuration eliminates the chance of a door flying open on the highway. I like the danger factor of the suicide door, but this old girl cannot have everything going for her. The plan is for a total shell off, frame off restoration. When completed walking into Luna will be like stepping back to 1954. Now to go fetch her. Might have to wait for all that snow to melt.
Posted by Frank Yensan at 4:14 PM 5 comments:

Let me tell you coordinating all the surfaces in a trailer remodel is no easy task. It takes a great deal of visualizing abilities. I have to kind of see the finished project before I even begin, honing in the details is my job. When it comes to laminates there are five major manufactures. Each one has a standard line of at least 200 choices. Then each one has a specialty line too. The choices are simply over whelming. 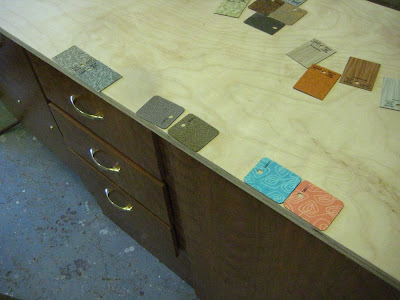 There are so many choices that it actually can be daunting to make a choice. I put a bunch of them on the edge of the counter top blank and tried my best to visualize it in the areas it will be used. A vanity top seems like a small thing, but it makes a huge visual impact. All the details within the room need to all work well together, for it is hard to hide things in such a small place. 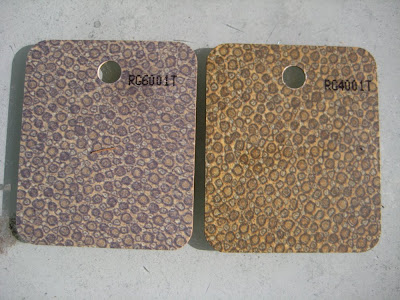 This one was shot down by three people right away. They thought it was too busy. One friend said it remind him of leopard skin. I let it pass down the list of choices even though I liked both. The colors of the right sample worked very well with the color of the cherry. 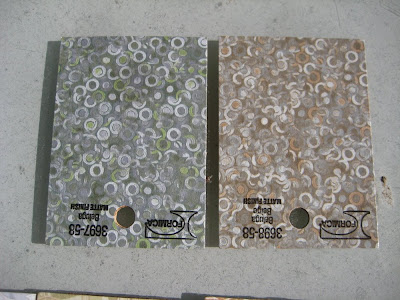 This sample on the right was high in the running for a while. I thought the circles were rather reminiscent of the rivet heads that litter the floor when drilling off interior panels. The colors in the pattern worked nicely and from a distance make a nice soft look. It just did not feel like something my client would seek out. 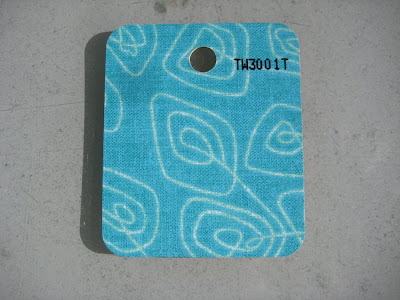 I wanted something kind of retro and a little dated. This is a 1961 travel trailer, so that aesthetic is kind of important to me. I felt this one was too busy with a veneer that has so much character. I think someone will want a trailer done that is more wild and you will see this one used in a future project. 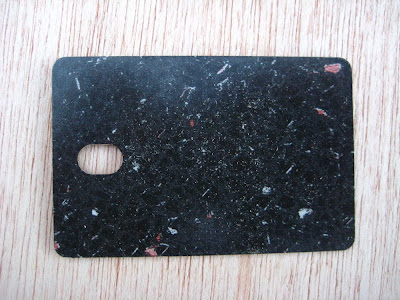 This one is kind of interesting. It is a lot like linoleum in it's appearance. The speckles are nice for hiding dirt but it is just too dark. 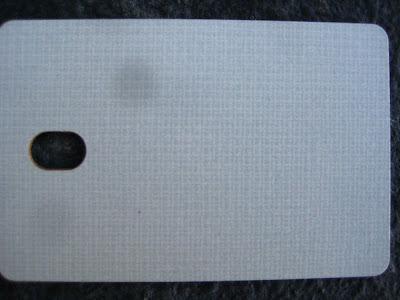 This is what I went with. It is Wilsonart 4876-38 Sheer Mesh. I like the pattern for it reminds me of grandma's oil cloth kitchen table cloth. Very simple and very classic. The light color will also brighten up the bathroom. The response I got to it from the client was "cool ass cool, I like it". Good thing he likes it because I already purchased the sheets needed.
Posted by Frank Yensan at 12:50 PM 3 comments: