Tales of the Toaster

The Toaster has come to FTW for a relaunch of her new lease on life. Toaster is known to a number of you reading. The tale of this trailer was told once on The Vintage Airstream Podcast. I will try and summarize it quickly... Mary and Rick buy Toaster. Toaster looks absolutely perfect and everything works. Rick and Mary go to a rally and show their beautiful trailer off. They invite a restoration specialist in to look at Toaster. Restoration specialist pulls out ice pick and begins probing. Seconds pass, dreams are dashed when rot is found. 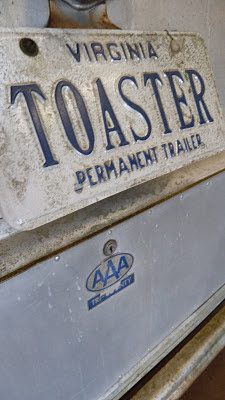 Mary and Rick are in love with their trailer so what should they do? Fix it... If you go on Airforums, you will find a community more than willing to guide you into how to fix it yourself. Unfortunately, not everyone has the time or energy to see a major project like this through to the end. Mary and Rick made a good stab at the work, but time and life got into the way. Toaster has sat idol while Rick and Mary's desire to go Streaming has only grown. They decided this was going to be the last winter Toaster was going to just sit there waiting. 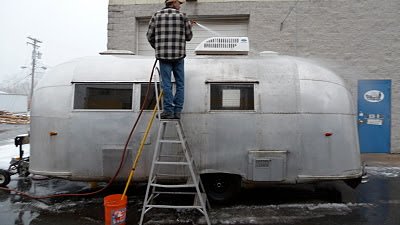 The very first thing we needed to do was give the old girl a bath. Reviewing these photos, I do not see her as dirty as she was. For the past four years Toaster has been sitting in the shade, collecting tree fungus and mold. 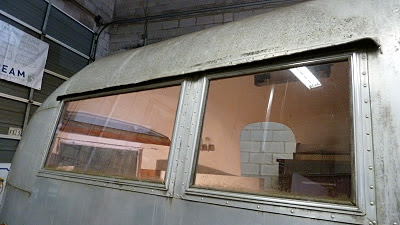 Here you can see a little indication of the green velvet that covered her. These 61 Safaris are some awesome little trailers. There was another 61 Safari here last year for work. We are real fond of this era. I am often asked what trailer to buy. My pick is always 1958- 62. If your looking for small with big trailer function, then this is the unit for you. 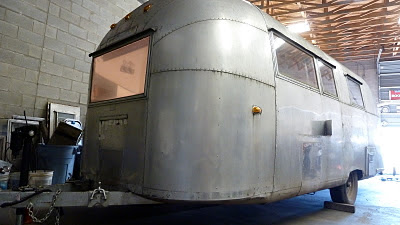 Here she is washed and ready for some work. Our first task was to fix all the structural issues. We started right up front with correcting some issues where the skin and shell meets the frame. 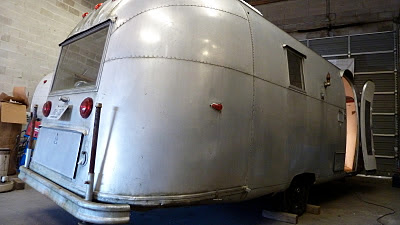 The structural work continued to the rear where a cross member was fixed and the bumper repaired where it meets the frame. It is very common on this era of trailer for the area where the frame meets the body to rust away. We cut out the rot and put in some new steal. 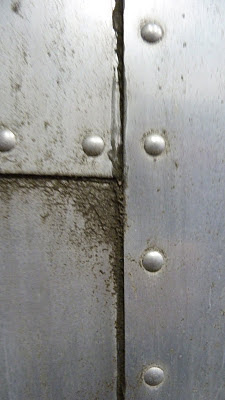 Here is an example of the skin shortly after arrival. 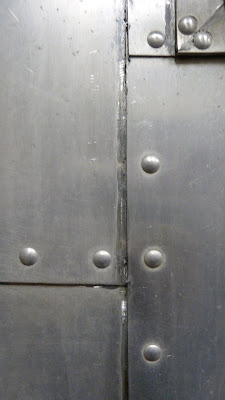 Here is the same spot post cleaning. Note the brighter aluminum where the old seam sealant was removed. All the seams were picked clean of old sealant and caulk. We then replaced all the sealant with new material. Two rain storms now and no signs of leaks. Leaks are a killer. They start some where out of sight, say, the plumbing stack. You do not see it running down the vent stack inside the closet. Once it hits the ground you do not see it because the capillary action pulls it under black tank and out of sight. Then by the time you notice it, or even never notice it, it has gotten a very firm hold into your floor. Funny "firm hold"... it could not be further from "firm." 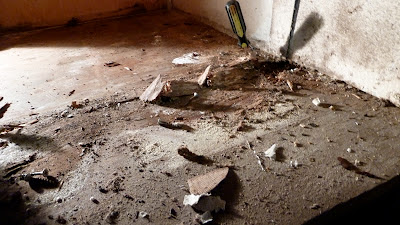 The only real way to stop the rot is to remove it totally. It will just keep spreading every time a little moisture is introduced back to the surface. 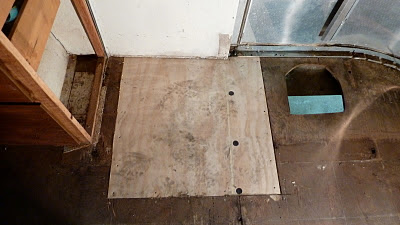 Here is the area we repaired. Now normally we replace the entire sheet. That form of repair is a bit extreme for this small area, however we are always concerned about keeping it all unified. So if you can visualize as I describe please. The three black dots are elevator bolts. The one closest to you is bolted to the cross member, and the other two are bolted to the outrigger. This repair bridges across the main frame rail. The repair is also bolted at the end of the outrigger inside the wall. There are also two other bolts through the channel and floor. Around the three sides is a splice screwed and glued to both pieces. Just to bond one more time, we also used biscuits along that seam. Between all the splines, splices, and biscuits, this is one solid patch. 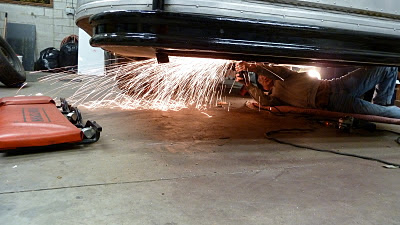 The frame has been slightly adjusted to accept a grey water tank. 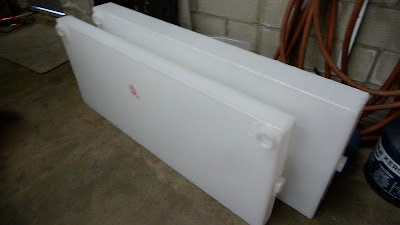 Here are two custom tanks that arrived this past week. The big one is for a 1971 Overlander. The smaller one is for this project. Both tanks are designed to fit into the frame without any major modifications. What a difference 10 years can make in sizing. 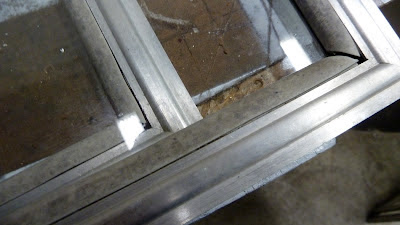 Windows have been a big concern. We have been rebuilding each one. They were done a few years back, but the gaskets have shrunk back from the miters. Some were worse than others. 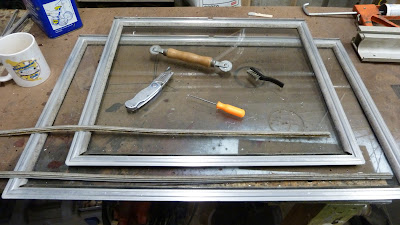 It was my reasoning that since shrinking was an issue, perhaps If I used pre-shrunk material, I would be golden. By reusing the longest ones on the next longest ones, I just might have to only replace a little gasket. As it worked out, the biggest window was the only one requiring new gaskets. 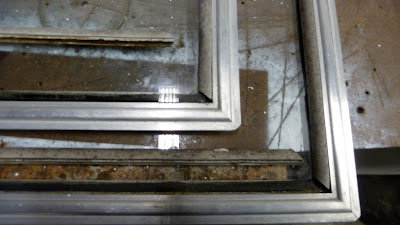 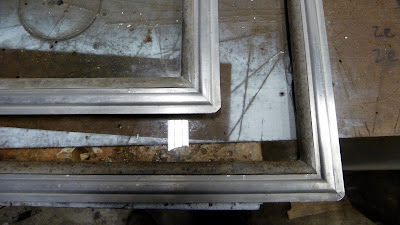 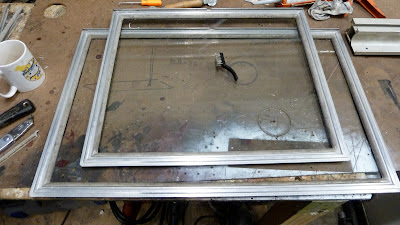 Just like new, only using the pre- shrunk gasket. 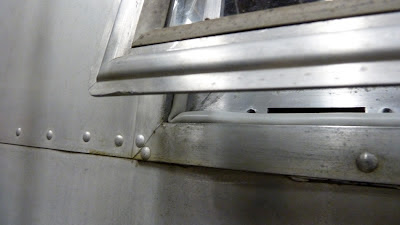 This style of window has an inner bulb style seal. When closed, the sash presses firmly against the seal creating a good leak proof closure. 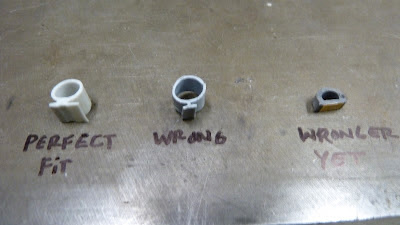 There are a couple of commonly used replacements for this bulb seal. The one on the left is an exact copy of the original and is offered by Vintage Trailer Supply. The center one is also offered by VTS and other suppliers, but it is the bulb seal for jalousie windows. Often I see this offered by other supplies as the proper seal. It does fit, but it also falls out after a few months. The third is a foam "d" seal offered as a replacement and even "improvement" for the original bulb seal. I will just stop here. 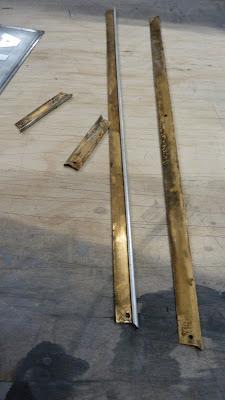 A few months back a thread was going on the Airforums about Wally Byam and his Gold Trailer. It was thrown out there, that left over, gold aluminum was used on some production units. Gold aluminum trim was noted as being a clear indication. Well, look here, Wally's gold aluminum! Sorry, but I find that story to be tall tale. 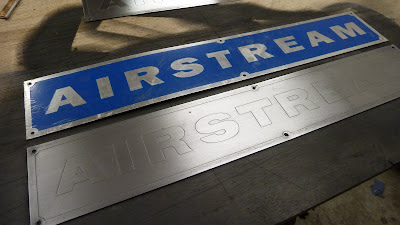 Here is a very hard call; To restore the original name badges, replace them with reproductions, or to reuse the originals. Most people do not see the subtle differences between the original and reproduction version. I however cannot take eye off them. The "r" bothers me the most, but all the letters are just not as bold looking. We went with the "originals cleaned" up route. 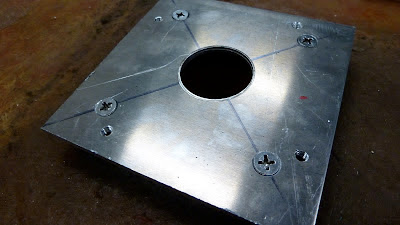 We also have converted the black tank over from the original Thetford valve to the more modern Valterra one. An adapter plate was fabricated to make the conversion. 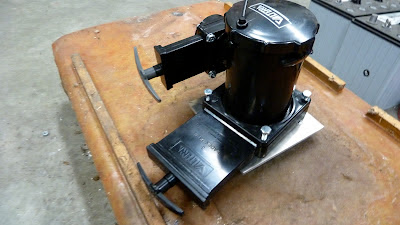 Next post about this trailer will be to cover the application of Zolatone. Hope you will return to read about it.
Posted by Frank Yensan at 2:30 AM 9 comments: