Jealousy is a cardinal sin is it not? Oh, who am I kidding, and what do I know about sin... What I do know is good things happen to good people. A very good thing has happened to a very good friend and and I am happy for him beyond belief. 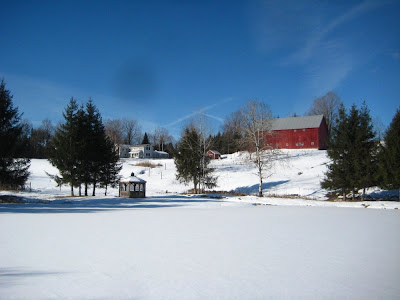 Rob Baker has bought the farm. No, he is not dead, he bought a farm. Sixty two acres of beauty in Central New York. The property is spectacular and it could not have happened to a more deserving family. This is the view from what I hope will become my personal courtesy parking spot. Fish right out the front door in this beautiful spring feed pond. 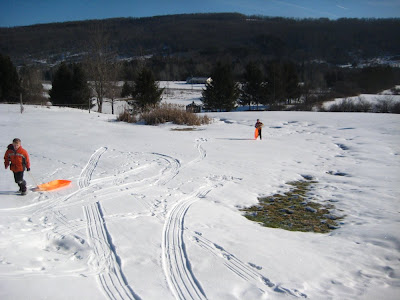 My oldest and I drove up on Sunday morning to help move some items up to the house from their old house down the road. Our kids were able to do what kids do best, play in the great outdoors. Ava and Stanton had a blast going down the hill on sleds as Rob and I moved things. Needless to say, she did not want to leave after we got Luna hooked up to the truck 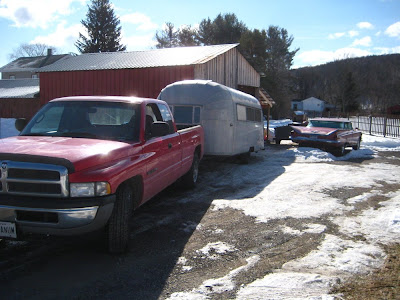 Now settle down. Yes that is Luna and yes she is mine. Well, actually she is my companies. Luna is a 1954 front kitchen Safari. If anyone knows the history of these trailers, they will know that they were designed by caravanners for caravanning. These layouts a fairly rare, and were very well thought out. This is the perfect trailer for a couple traveling together for long periods of time. My intension is to see her restored faithfully to original condition. I am guessing that it will be a long term project and may not happen for many years to come. I will be sealing her up and trying to keep her from degrading any more than she has. I would have to say her present condition is very rough. A diamond is very rough too before it is cut into a gem. 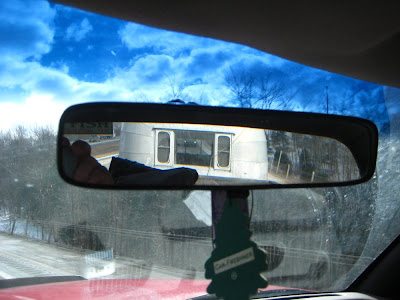 I towed her home yesterday without any issues. Thank you Rob for letting me be her next owner. 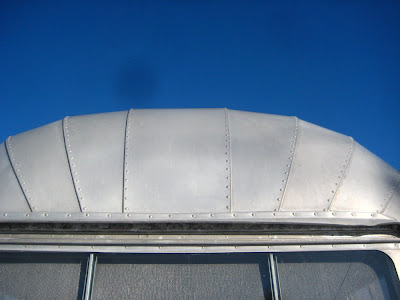 There is only one thing vintage guys want more than thirteen panels and that is fifteen. I can live with thirteen. 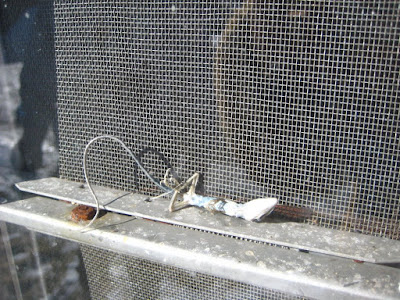 Poor fella, should have stayed in Florida where he belonged. I will have to save him and find a place to put him in a shadow box as one of the archived trailer finds. 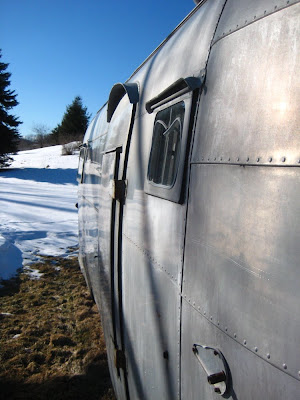 Straight skin with very few flaws. There is only one major scratch down the street side and it is so consistent and straight that it almost look intentional. 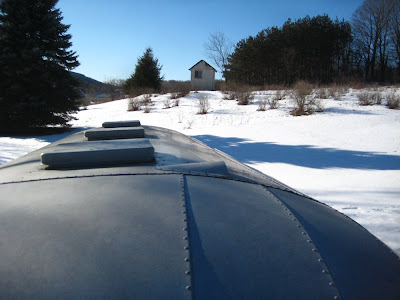 Yes they all leak... all three vents leak. 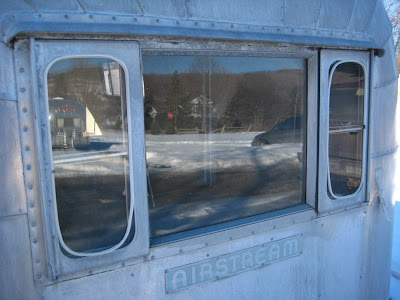 Big window to cook in front of. The one on the right is inside the bathroom. 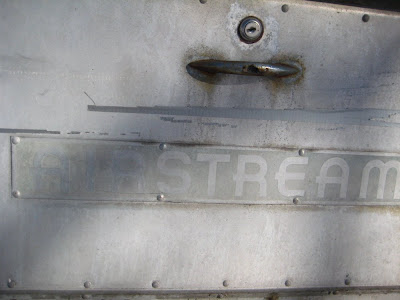 I scream, you scream, we all scream what a killer Airstream... 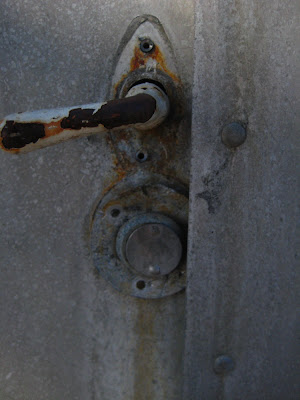 Not sure it is original, but it does look very cool. 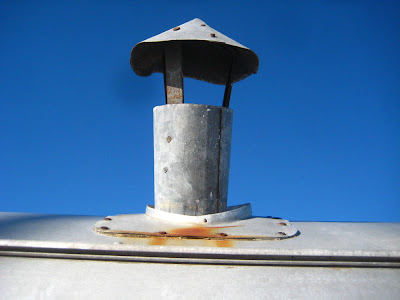 I am sure it is not original... 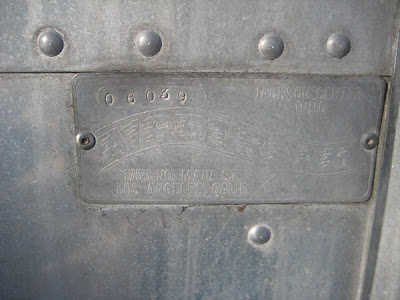 Ohio built trailer for sure. 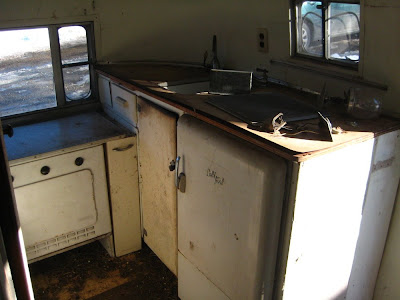 ... appliances untested at present, but previous owner claimed they work in the past... 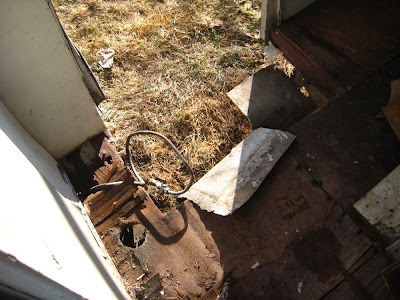 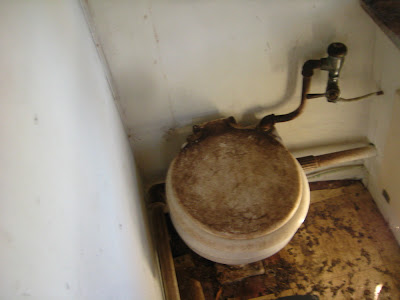 That head is direct drop. I will probably have to do something about that. 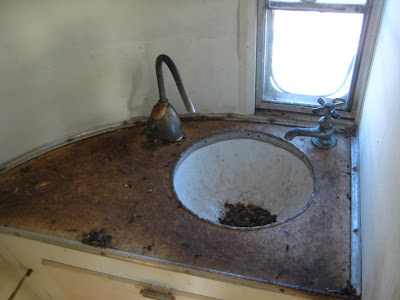 Most people freak out over mouse droppings. Are rat dropping worse or better? 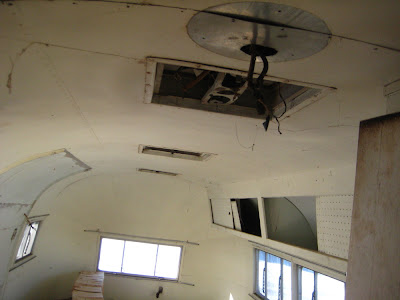 Hey someone stole my light fixture... wonder where that got off to. Could it be that item was something someone wanted the trailer for? Would they remove just that part? Could it be in someone's house down in Florida on their ceiling? They were very attractive in 1954. 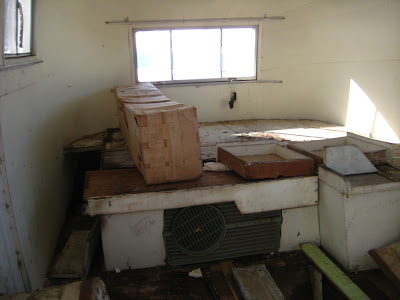 That is some sort of home spun air conditioning system. It vents out through the back hatch and was installed in a fairly professional way. Unfortunately it was it has changed the total feel of the rear end. Instead of two twin beds with a night stand between them, there is this sleeping platform. I will be removing every single bit of what you see here. I do toy with making it a double or queen, so Beth and I can sleep together in the same bed.
Posted by Frank Yensan at 1:54 AM 5 comments:

Seller be square before the buyer drives there

Whirl wind adventure is what they call it. A 656 mile round trip, adventure of zero return is how I see it. Yesterday I left my house at about 4 am equipped with everything I might need to recover a trailer. The trailer was in Pittsburgh and I am in Baltimore. I didn't want to waste such a long drive out, so I made certain I was prepared for everything. The trailer was listed on Craig's List and there were others interested in her, time was crucial. The Seller had said in his ad that it was a 60's or 70's trailer and it was hard to tell in the four blurry photos what year it was exactly. I did know however, she was right in my sweet spot of the Airstream eras, 1958- 1962. After a few phone calls with the seller we found it to be 1958 double bed unit built in Ohio. Another big plus in my book, for I have a special spot in my heart for Ohio built trailers. I asked the seller three separate times if there were any major dents, and all three times I was told no, only a very minor one in the back that could easily be pushed out. So I blasted out there pushing my truck down the Pennsylvania Turnpike at 80 mph. 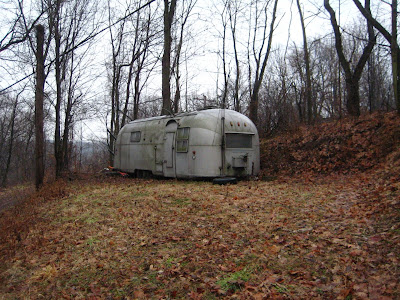 As soon as I saw the trailer, I could feel something was not right. From 50 feet away, I could see that behind the door the entire skin was rippled like the surface of the ocean. The door had either blown open twenty seven times on the highway, or someone had forgotten to close the door and a wind storm had beat it against the side over and over. It does not show up too well due to all the tree fungus and mold growing on her, but in real life it was bad. 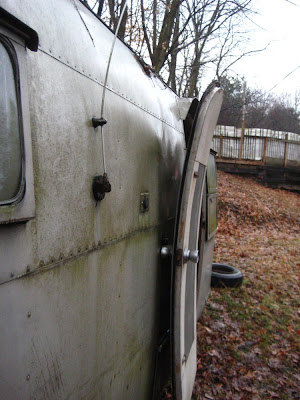 Maybe in this photo you can see how well the door nestles into the side of the trailer. When closed, I could almost slide my hand thru the gap in the top. So that is three very long horizontal panels to be replaced, at least one bent rib there, and a door that needs to be re shaped to fit. We step inside and it was as if a tear gas bomb had been set off. Mouse urine must be flowing in rivers inside of her, or maybe it was the rain leaking in from literally every window. But the interior was so perfect. Not one thing on the inside had been molested. Every square inch was in pristine condition. The zolatone was a very dramatic speckle of greens and grey tones. The room dividers were in perfect condition and matched the zolatone exactly. All the cabinets opened and closed then latched. It was all there and so was that eye searing mouse urine. I got out the flash light and an ice pick and started to investigate how the floor was. Lets just say the ice pick was not needed. Every spot I could see plywood, it was black and rotting. Even the patch by the door, was beginning to rot. With in moments, I knew that the entire floor back to front needed to be replaced. I needed some air kind of bad, for the urine was starting to constrict my throat. I remembered the small, easily fixable, dent in the rear. I suggested we go check it out. Before we got to the back, the seller said "I didn't do that... I didn't push it with a back hoe..." 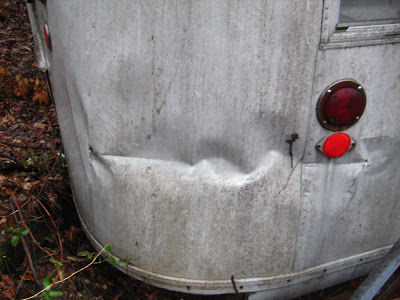 "GOD DAMN, YOU ARE KIDDING ME!!!!!"... "You said this is the only minor easily fixable dent" I could not get back far enough to shot the entire rear, but that crease went all the way across. It was actually two stabs of a back hoe and resulted in six separate tears thru the skin. Three more skin panels and a minimum of six ribs to be repaired there. Suddenly I heard voices in my head. I started hearing a Vintage Airstream Podcast from a year ago, and it was looping in my head... Rob Baker was saying "sometimes you just have to be smart enough to was walk away" Tim Shepard was saying " I drove to Texas and had to walk away" and Colin was saying "Literally " It was looping around like a Philip Glass/ Brian Eno melody... "WALK, WALK, WALK, WALK, away... walk, walk, walk, walk, away" I told the seller, "Sorry, Butch, I have to pass, I am buying this for my client and he will not be happy if I tell him that I will need to not only replace the floor, but also a quarter of the exterior panels." He was not pleased. 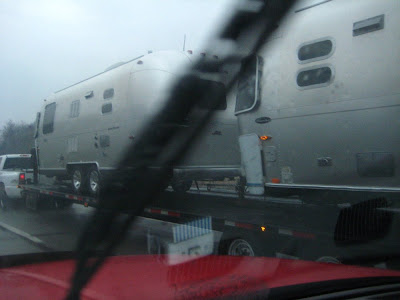 So back on the highway I got, empty handed, cash still in my pocket. Trying my best to enjoy the sites, even though it was now pouring rain. Next stop was Thurmont Maryland to look at a 1972 Overlander being auctioned on Ebay. 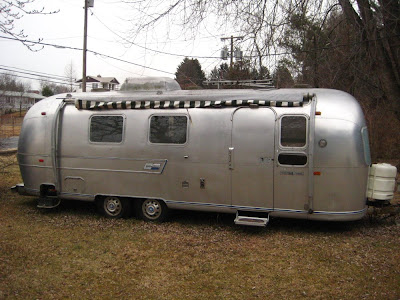 Her skin was perfect. No dents, no scratches, not even clear coat issues. 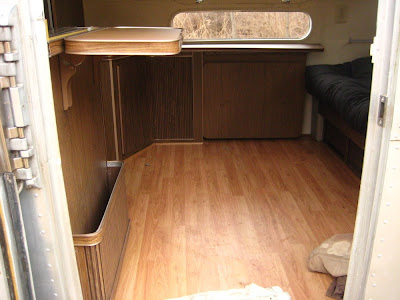 But when I opened the door, I saw the pergo floor and knew right away that someone was hiding something. Upon opening cabinets and looking in and under I could clearly see the floor rot. Strike one. I wanted to see how the latches and tambour doors worked and quickly realized that everything was made of plastic. In 1972 plastic must have been a new technology for Airstream, for it was as brittle as chalk. I stopped looking out of fear of breaking something. Strike two. 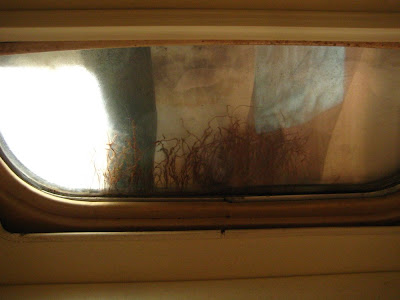 Another new technology must have been thermo pane windows. A few has nice beads of condensation in them and one even had ferns growing between the glass. Was that a terrarium an option or a standard feature? Once again I heard a voice, but this time it was Kenny Rodgers and he was playing his guitar.... 'you gotta know when to hold, know when to fold em...."
Posted by Frank Yensan at 2:17 AM 9 comments:

I was sent a link to this video and just could not resist putting on this blog. Restoring any all of what you see is exactly my ambition. Hope you all enjoy...

Posted by Frank Yensan at 4:49 AM No comments: 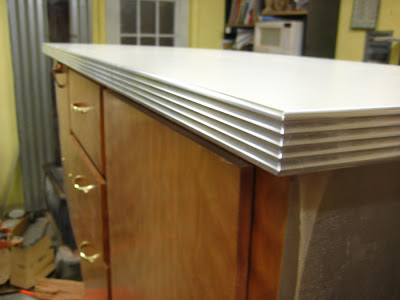 I know it has looked like I have been working on this vanity forever, but it actually has just been sitting waiting on the countertop edging to come. 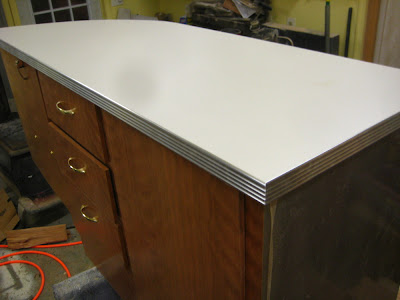 The edging was back ordered so it took a while to show up. I feel this edging is very timeless in it's appearance and that is why it was used. The laminate is very neutral and should allow for matching any colors or patterns very easily. My client just needs to cut out for the sink and this baby is good to go. 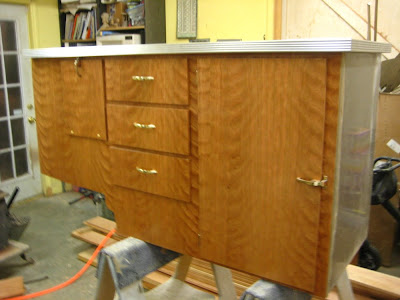 That pealing edge on the side is the protective plastic film over the aluminum sheet. My client will peal it off once he puts it in. I am very proud of the way it came out. I look forward to doing the rest of the furniture as soon as it comes to me. This cherry is without a doubt fitting of an Ambassador. Frank's Trailer Works courier service (Rob Baker on his way home from Camp Lejeune in North Carolina) is due in any moment. He will ferry it up to central New York.
Posted by Frank Yensan at 3:30 AM 3 comments: