For the past three years, during the months all the leaves are off the trees, I have gotten a one second glimpse of this from the highway while on the way to see my parents. This 1949 Spartan Royal Mansion sits 1/2 mile off the highway in a farmers field and as I said, I see it for one second only. 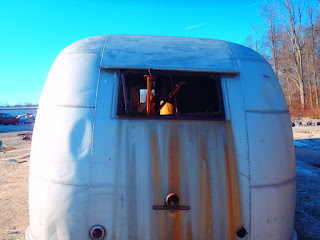 For years I would mutter to myself that one of these days I needed to track down it's owner. I finally looked for it on Google maps. When I showed it to my Dad, he knew exactly who owned the property. Two weeks ago he ran into the guy and set up a meeting between the two of us. 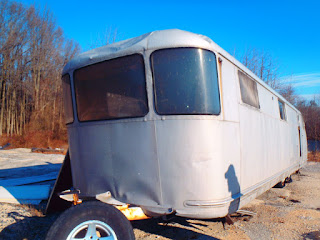 As I walked up on her I already knew that plan "A" of finally finding my forever trailer was not going to happen. I switched to plan "B" of buy it and flip it. 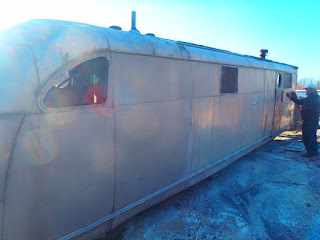 As I looked closer, I went to plan "C" which is to salvage it for parts and then scrap it out. Unfortunately, even plan "C" was given up as a lost cause as any part that could have offset the purchase price, tires, and the cost of transporting it to my yard were all gone. 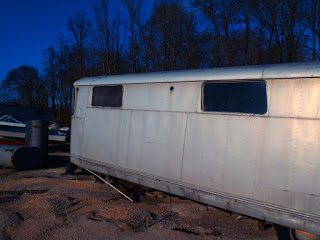 This side actually looks good in the photo, but trust me, this photo lies tremendously. It was seriously dented all over the poor girl. 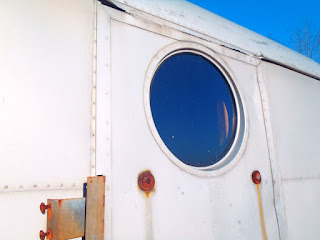 The porthole widows were a serious temptation, but it just was so rotted out on the inside, I doubted I could move it safely. 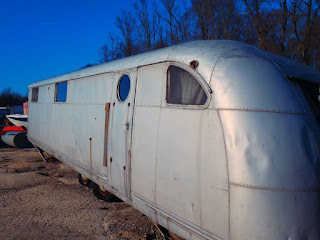 At 33 1/2 feet long the cost of a lowboy to get it an hour to Baltimore just could not be justified. I had to pass. I hate to have to pass. 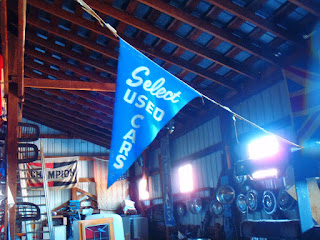 We moved on to a little tour of some used cars. American Pickers tried to get in here and were denied. 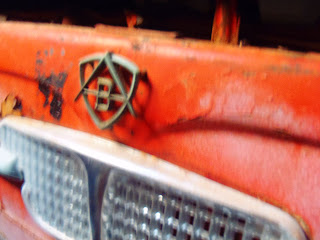 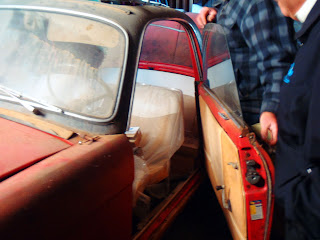 Some of these cars are extremely rare. 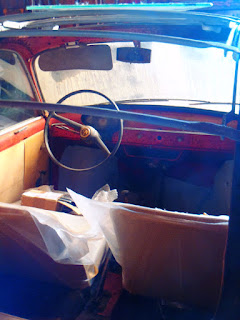 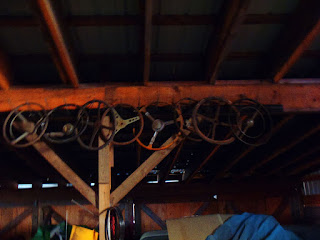 Tons of stuff hanging from the rafters. Lots of goodies. Len kept calling it junk. I knew, he knew, we both knew it was mostly all gold with a little junk thrown in. 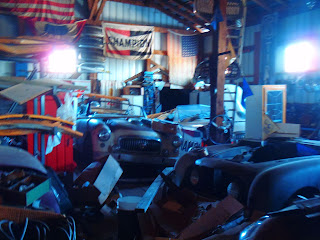 There was stuff everywhere. My Dad kept whispering "look at all this shit..." I kept thinking how much I wished I could have it all. 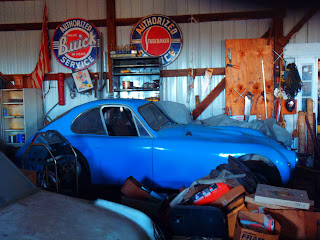 This Nash Healey won a few major races. 55 gallon fuel tank. The fuel could be pumped from one side to the others to hold the car on the curves better. 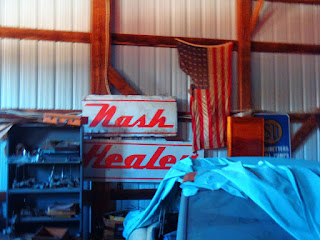 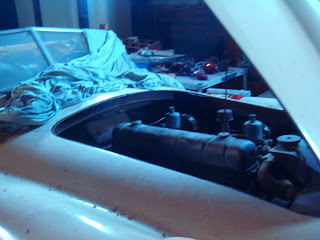 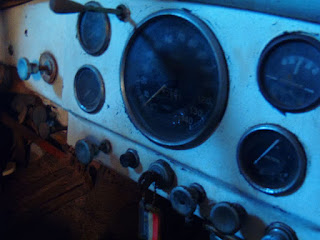 I think one was for smoke, one for oil slick, one for rockets forward, one rockets to the rear, and one for tacks. 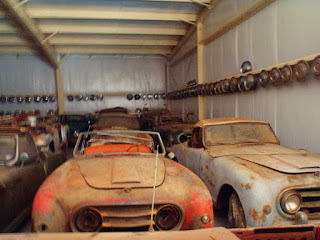 I have a lot of hub caps. Mine are a drop in a bucket compared to his collection. 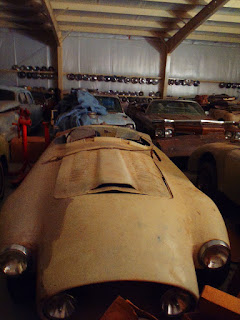 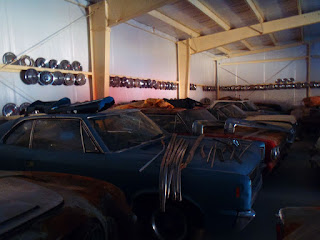 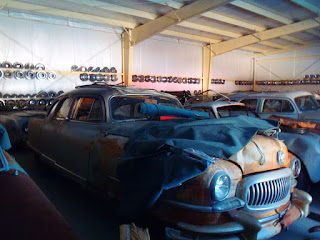 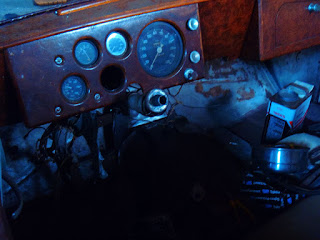 That is rosewood burl. Any concept of how high end that wood is? 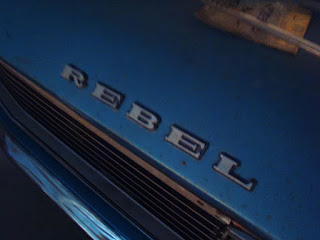 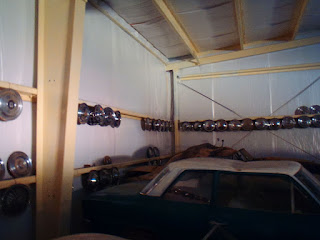 A lot of the cars in this building got damaged when the roof of the previous building collapsed in the same snow storm that brought down the B&O railroad museum. 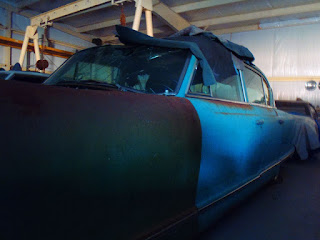 This was my number one pick I think it is a 1949 Nash Ambassador Super. I might be going back for this car. 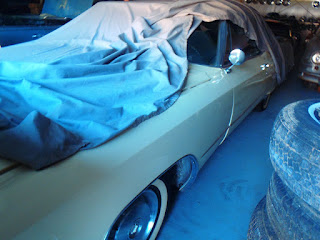 This was pick number two. 1967 Cadillac convertible. Restored 10 years ago professionally. He just bought it two weeks ago. The attachment was still very strong. 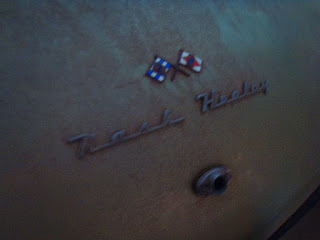 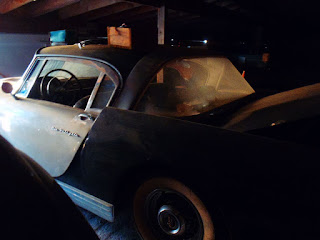 This Cadillac was one of two made. NFS I was told. Sitting next to it is a Lincoln. It was the first production year of the Lincoln. Also NFS. 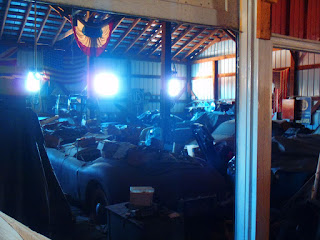 I was actually getting lost in the place. It went on and on and on... 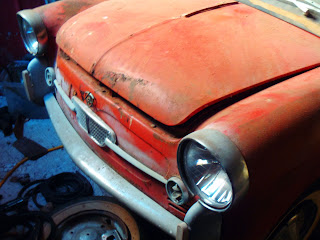